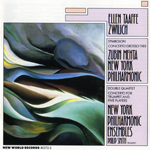 A Romantic Shostakovich Beside the Older, Dour One

By BERNARD HOLLAND
Shostakovich lived two lives in music: one to survive in a public world, the other to survive in a private one. The first saved his neck, the second his sanity. If the bigger pieces made their way between personal conviction and Soviet orthodoxy, it was the chamber music, some of it not intended for immediate public consumption, that allowed the composer to keep his thoughts to himself.

Anne-Marie McDermott, a resident pianist with the Chamber Music Society of Lincoln Center, looked forward to the composers centennial next year with Shostakovich concerts on Friday and Sunday at Alice Tully Hall. There is one more tonight. With duos, trios, the odd octet and concerto, and even a few throwaway trifles, she has chosen a biography of sorts without chronology. Thus, a young mans look back on Romanticism can stand next to the dour depressions and grim humor of the later work.

All-Shostakovich programs work, given the variety of his music and the lack of inhibition in his choice of styles and language. His career contradicts a once-held notion that tonality had run out of ideas. Shostakovich found plenty of new ones. Indeed, the G minor Piano Quintet on Friday and the C minor Concerto for Piano, Trumpet and Strings on Sunday were major events.

Both offered the composers arid, anguished landscapes side by side with raucous dance celebrations: music that would sound almost happy were it not for the frantic undertones. With Philip Smiths honky-tonk trumpet and Ms. McDermotts impressive piano playing, the concerto was sheer pleasure curdled by sarcasm. Like Beethovens "Grosse Fuge," Shostakovich is not always pleasant to listen to but worth hearing.

Three duets for two violins and piano arranged charming excerpts from film and theater music. The D minor Sonata for Cello and Piano and the E minor Trio from 1944 found Shostakovich still teetering between celebrity and political disfavor. The Sonata in D for Violin and Piano is post-Stalin: minimal, sparsely economical, with a kind of bruised melancholy.

Ms. McDermott was almost everywhere. She seems to have two piano sounds: one subdued for chamber music, the other bigger and brighter for pieces like the concerto. Ida Kavafian, the violinist, was nearly as busy on Friday and Sunday, as were Fred Sherry, the cellist, and Paul Neubauer, the violist. Clancy Newman was the cellist in the early C minor Trio on Friday. The other players, all first rate, were Ani Kavafian, Frank Huang, Erin Keefe, Tai Murray and Carmit Zori, violinists; Richard ONeill. violist; and Kurt Muroki, bassist.

Tonights music is mostly from the later years. Given the size of Sundays audience, you may have trouble getting in, but it is worth a try.